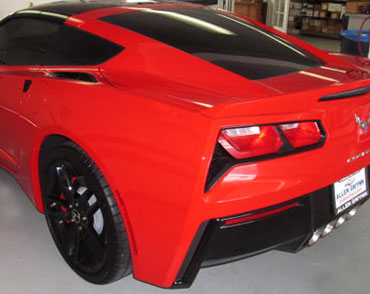 "This revolutionary and unique process, allows for maximum heat rejections without a metal film layer, which can interfere with radio and/or satellite signals. It also gives our films a stylish look with outstanding color stability. In fact, it’s so advanced that in time-based tests, 3M Color-Stable Auto Film never turned purple while conventional dyed films rapidly change to a purple color."

"With the new 3M Ceramic Series films, we bring you the two virtues that are most important: outstanding clarity and superior heat reduction."

"Using nanotechnology we’ve created ceramics so fine they are not only invisible to the naked eye, they are imperceptible with an ordinary microscope. These ceramics allow us to create a film that is tough, won’t corrode and enhances your view with greater clarity."

"By using advanced ceramics, our film retains its color and appearance over time. Other high performance sputtered metal films can corrode, often changing color on the edges while traditional window films that rely on dyes are prone to fading over time, changing to a purplish hue. The 3M Ceramic Series films will look good not just the first year, but for years to come."

"If you are looking for the ultimate in high technology, superior clarity and performance with a premium look – Then 3M Crystalline Automotive Window Film is for you."

"3M Crystalline Automotive Window Films feature a proprietary, multilayer optical film technology that combines over 200 layers in a film that is thinner than a Post-it Note. This unique technology is the reason a clear film can reject more heat than darker films. Thin film technology is a core competency at 3M, and the multilayer film technology we incorporate in our newest window film is similar to those 3M developed for use in a range of products found in your home or office."

The percentage of visible light that passes directly thought filmed glass; the higher the number, the lighter the film.

The percentage of total solar energy rejected by filmed glass; the higher the value, the less solar heat energy is transmitted by the glass.

The percent of infrared light rejected by the film on the glass. Infrared light is primarily responsible for the heat you feel when driving.

The percentage of ultraviolet light that is rejected by filmed glass. Ultraviolet light contributes to sunburn and other harmful skin conditions from the sun and to the fading and deterioration of fabrics and leather.

This warranty is provided only to the original consumer and is not transferable. Please retain the warranty card as it MUST be presented along with the original invoice to a participating 3M authorized window film dealer to receive warranty service.